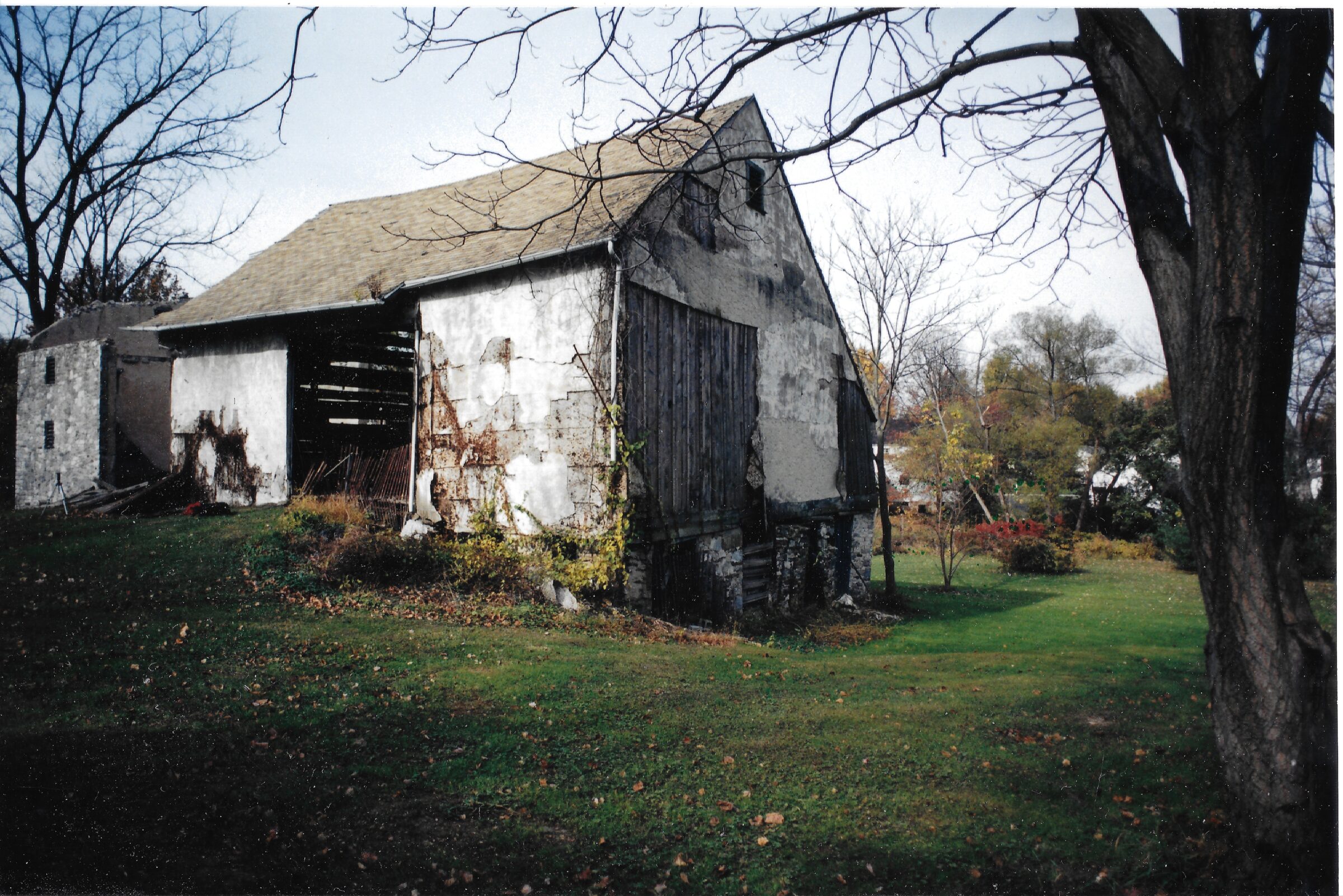 The Jones Log Barn was one of the oldest, intact log barns in the Mid Atlantic region. Its rare architecture and unique history made it eligible for the National Register of Historic Places and it was certified as a Chester County Historic Resource in 2004.  The barn had stood for over 250 years.  Sadly, due to time and benign neglect, its foundation had cracked and its roof had collapsed.  Because its deteriorating state posed a liability, the owner of the property requested to have it demolished.  He also offered to donate the barn to Tredyffrin Township.  Demolition seemed to be the barn’s fate until the Tredyffrin Township Historic Architectural Review Board (HARB) petitioned the Board of Supervisors at its October 2, 2000 meeting for support in its efforts to save this unique piece of Tredyffrin history.  The Board of Supervisors agreed to loan the HARB $25,000.00 to dismantle the barn and store it with the requirement that the HARB must pay back the $25,000.00 loan and pay for all the work necessary to restore and rebuild the barn.

Constructed within 10 years of the death of Pennsylvania’s founder, William Penn, the circa 1730 Jones Barn paints a picture of early Welsh-American architecture.  At the time this barn was built, the western shores of the Schuylkill River were considered the wild frontier as they were occupied by Indians, wild animals, and other unknowns.  Life was very hard for these original inhabitants of the land upon which this barn sat.  Rowland Richard, the original owner, began cultivating this heavily forested land in 1708.  In those times, it took nearly a year to clear an acre of land.  By 1727, the land had passed to Griffith John (or Jones) who began building the structures seen on the land today – a stone dwelling, the barn, a carriage house, and a spring house.  The early barn was used for storing hay and grains cultivated on the land.  A cow or two and maybe a horse lived in the stalls under the main barn.  During the fall and winter of 1777, under Samuel Jones’ (Griffith’s son) ownership, the Revolu-tionary War came to the Jones farm.  In the third week of September, British General Sir William Howe occupied the complex as he and his troops pillaged the surrounding countryside.  It is from this farm that he launched the attack on Paoli, now known as the infamous Paoli Massacre.  When General Washington and his troops wintered in Valley Forge in the brutal winter of 1777 into 1778, this farm was occupied by General Charles Scott of the Continental Army.

The Jones barn is unique, not only for its age and its contributions to Pennsylvania history, but also for its architecture.  The barn is reminiscent of English Lake District architecture.  The lower level of the barn which housed horses and cattle was built into the hillside using stone as its foundation.  The second floor of the barn was constructed of two log cribs.  The cribs were separated by a central threshing floor which was used to separate the seeds from the hay/grain.  The massive logs used to create the two cribs are 30 feet to 48.5 feet in length, devoid of bark.  The ends have been individually saddle-notched for a perfect fit.  In 1803, the son of Samuel Jones, Enoch, used stone from a quarry on the property to build a stone addition and forebay.   Both the addition and forebay display a strong Swiss-Germanic influence suggesting that Enoch hired Swiss Germanic tradesman who settled in the area.  They had arrived in the area following the French and Indian War massacre that drove them out of Berks County.  Through the architecture of the barn, one can see the history of early Pennsylvania life – its economics, the ethnic migratory patterns, and the lifestyle of that era.

In 2001 a nonprofit organization called the Tredyffrin Historic Preservation Trust (THPT) was formed by a group of concerned citizens and HARB members to address the needs of Tredyffrin’s historic resources.  It is now actively campaigning to raise the estimated $300,000.00 required to complete the reconstruction of the barn.  This Capital Campaign is considered Phase II of a three-Phase project.  In Phase I the logs were catalogued and stored; the Trust was organized and started fund raising; and, the $25,000 borrowed from Tredyffrin Township to dismantle the barn was repaid.  This phase also included hiring a qualified architectural restoration firm (Frens and Frens Restoration Architects of West Chester) to prepare construction plans and do preliminary site work; entering into an agreement with Duportail House, Inc., owners of the properties which feature General Duportail’s Quarters and the Federal Barn; and, reconstructing the new Jones barn foundation on this historic site.  When completed, the Jones Log Barn will be an integral part of the new Living History Center at Duportail.  Phase III will include the final construction and the installation of exhibits.

Working with the Board of Duportail House, the Trust envisions promoting the Jones Barn as part of several themes including: Chester County Welsh Heritage (in conjunction with the County’s heritage tourism program); the early history of the Township; Chester County barn construction; the Township’s place in the American Revolutionary War and in the early development of our nation; honoring the Township’s 1900 veterans and citizen soldiers; and, exploring the role of Valley Creek which is a tributary to the Schuylkill River during the encampment at Valley Forge and in the economic development of the area.  Exhibits will be developed with adults and students in mind.  Programs will include working with local schools to integrate this barn and the Living History Center at Duportail into the fabric of local history.